Earlier I blogged that Go is better than Java, but it lacked evidence and datapoints. I wanted to start from some earlier work, to prove to my colleagues that Go is as fast as Java and quick to start up. Speed is critical for serverless since the process can be stopped when not in use and started again from cold to serve a request!

So after searching https://dzone.com/ for “Java Go” comparisons I was surprised to find a benchmark article by Ivan Nikitsenka (original author) at the top of results:

Which concluded that Java can serve twice as many simultaneous users as the Go application.

Is that true?! Can Java’s lazily just-in-time compiler be faster than a Go static binary?! Can I reproduce his results!?

To the original author’s credit, he publishes the source of his Java & Golang application as well as how he tested with Jmeter, his results AND how to run it all on a neutral playing ground of AWS via Cloudformation!

I ran it locally on my T14s Thinkpad and indeed the Go application was erroring compared to the “springboot” Java app. Despite the bank-go image weighing in at 10.2MB compared to the 991MB image size of bank-java and consuming a lot less resources whilst running:

Why is Go slower?

Instinctively I thought the database connection must be the bottle neck. The original author’s bank-go database functions use https://github.com/lib/pq#status which recommends using pgx which is actively maintained. Great! All I need is to do, is switch the database driver from pq to pgx. Despite making the change to the “sql.DB” type compatible github.com/jackc/pgx/v4/stdlib … the same type of errors occurred when load testing…

After some soul searching and a cup of tea, perhaps it has something to do with how the connections are pooled to the database. Unfortunately it meant a refactor from *sql.DB to *pgxpool.Pool where context needs to be added. Yes! The errors have gone away. It also appears much faster. Whatever pgxpool (limiting connections to the database?) is doing, it seems to be working!

Load testing locally on my T14s 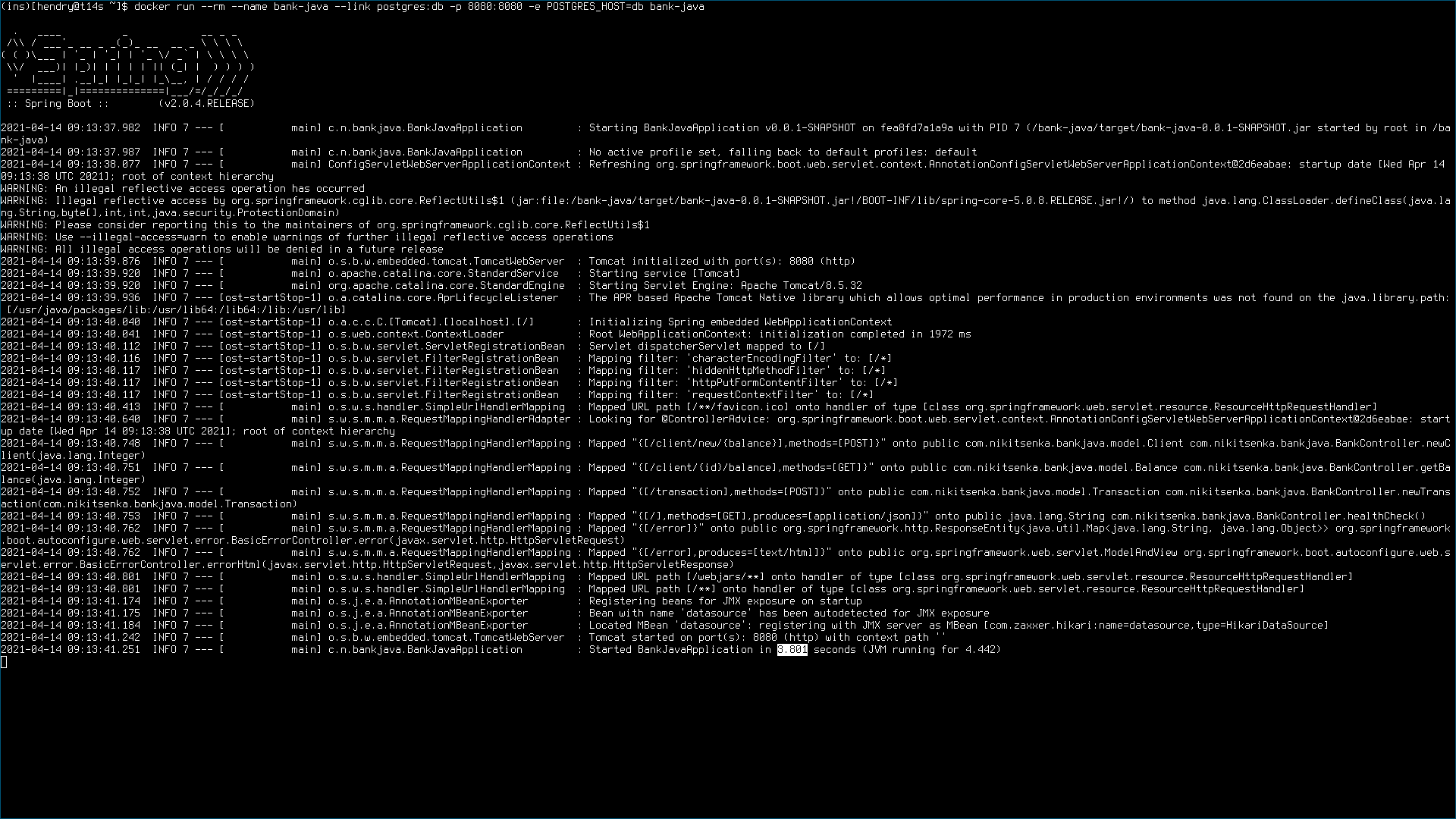 Locally I was seeing Go at ~7457 requests/sec and Java at ~5758 requests/sec once it warmed up. Pretty much the same. However we should run the original author’s jmeter test with a controlled / reproducible environment… enter the Cloud.

There are three potential bottlenecks:

And lets not forget that AWS’s T type instances (virtual machines) are Burstable Performance Instances and might be too variable for benchmarking.

I decided to use m4.large for both bank-{app,db} and run original jmeter benchmark upon the app server and update the Cloudformation to use AWS Linux ECS. Note that I hard coded the IP address of the database, so you need to change that when you are reproducing results yourself.

Not clear what the errors that the original author initially observed, since I think this is how the original author mistakenly concluded that Java could serve twice as many users. In my testing, I could run the tests without errors in either Go/Java stack when I waited patiently for the Java service to be ready, and not run the tests repeatedly as to cause too many open files.

The original authors’s Go code appears to have had a database connection pool limit issue which goes away when using pgxpool.

As the Reddit /r/java and YouTube comments suggest, For most tasks Java and Go are completely fine performance wise. However I did find Java quite unwieldy, with proponents mandating warm up time for Java, which would certainly result in a problematic Serverless cold start. In comparison Go has out of the box developer productivity and serverless friendly execution times.

Nonetheless Java frameworks to their credit are targeting slow startup times with Ahead of Time Compilation (AoT) with GraalVM & Quarkus. It is great to see healthy competition, though currently Java has some catching up to do!