Service teams would get vended a set of accounts (e.g: dev, stg, prd) that contain it-security guardrails (e.g. predefined roles that can be assumed) or other resources that are commonly used within the organization. An example of this could be integration with CI/CD. Service teams would use the accounts (dev, stg, prd) to develop software, typically with a different IaC solution (e.g terraform or cdk). These tools offer better ergonomics for application development. - Olaf Conijn

Assuming three accounts {dev,stg,prd} accounts, how does a cross functional service team deploy to production in a rigorous manner?

The simplest way to do it 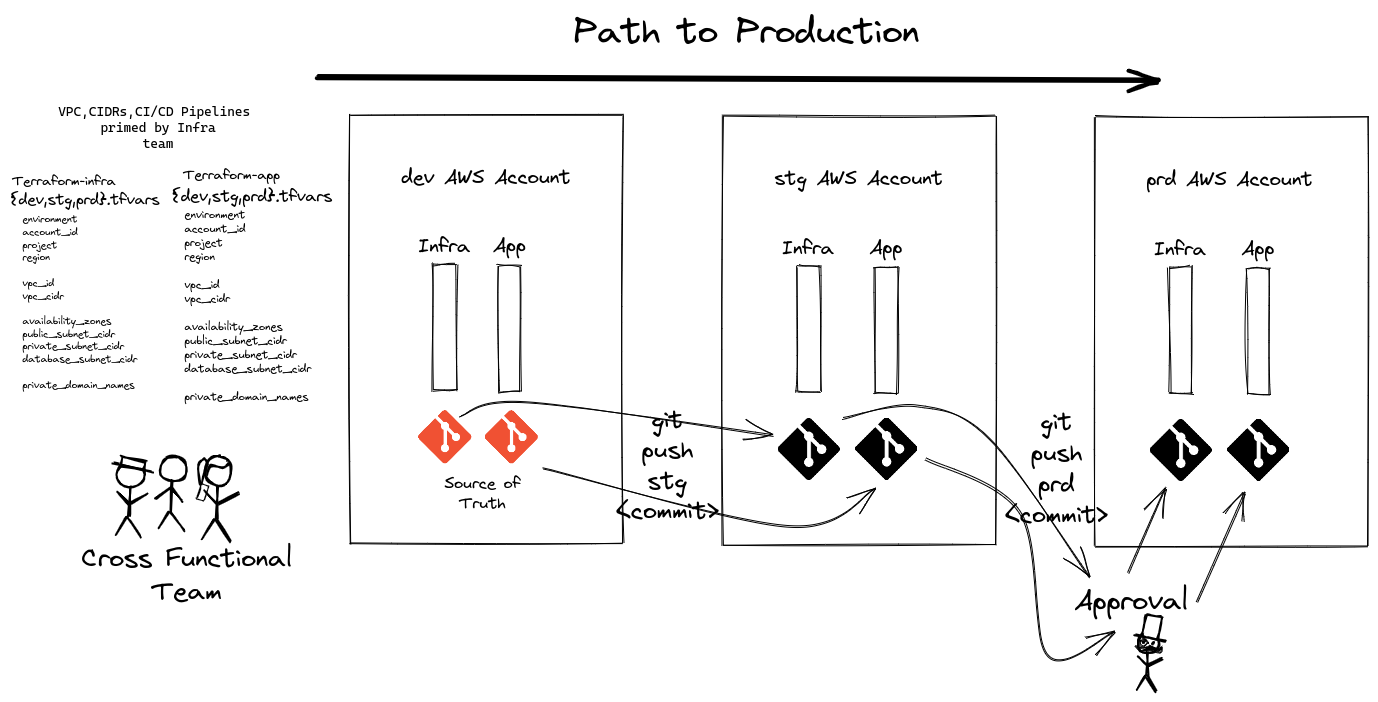 Each {dev,stg,prd} account has an AWS Code{Commit,Build,Pipeline} that triggers a build/deployment pipeline once code has been pushed to it.

The workflow is simple:

Need to rollback? With git push $env $prev_commit, you effectively practice gitops since deployments map to your git code state.

Workflows are great, but to effectively deploy to your {dev,stg,prd} environments, Github needs to be externally trusted.

Github’s access can be limited to say the Container Registry, i.e. builds instead of deployment, nonetheless there is a supply chain issue.

Also described as a One stack definition managed with a pipeline, however the problem is that “the pipeline” is often centralised unlike “The simplest way to do it” above, where the pipeline is minimal, native to each AWS account and driven exclusively via git push.

The top heavy, high maintenance, complex, centralised CI/CD pipelines in organisations is in stark contrast to the proposed AWS managed CI/CD aka AWS Code* in each {dev,stg,prd} account.

Other managed CI/CD management options like Github are considered, but that requires strong external trust and integration.

This path stresses reproducible builds and uses a git repository’s commit hash as the source of truth. Furthermore it empowers the service team since they can take responsibility for their Continuous Integration build rules and deployment. That said, production deployment approval and further guard rails can be introduced with a self service pattern.